Part seven of our Hamburger saga!

Yesterday, we decided to try Sofitel's extremely expensive breakfast.  Though there are plenty of places around the hotel that we could have tried, I like to see what hotels offer, especially when they charge 30 euros a person!  And I have to admit, Sofitel's breakfast was very impressive, even though we didn't come close to eating 60 euros worth of food.

The hotel offers a vast array of juices, cereals, breads, cheeses, cold cuts, and even champagne if you want it.  They also have a buffet that includes scrambled eggs, baked beans, sautéed mushrooms (yuck), several kinds of sausages, bacon, and soft and hard boiled eggs.  They have fruit, yogurt, smoked salmon, smoked trout, and other breakfast delicacies.  Yes, you can have most anything you want at Sofitel's breakfast, though I didn't see anything being cooked to order.  Service was pretty good, but not 30 euros good.  Still, they were doing a brisk business.  If we stay there again, we'll go to one of several local cafes and/or coffee shops.  Starbucks is close; so are several Ballzac outlets (whenever I saw the name Ballzac, it made me think of ball sack-- not so appetizing!).

We had several hours to kill before our flight at 4:25pm, so we checked our bags at the hotel after we checked out and did some more walking around Hamburg.  I took more photos so my iPhoto slide show will be more interesting.  One thing I noticed in Hamburg is that many people there are very tall.  It must be the Nordic influence up there because I saw quite a few women who were at least six feet tall and a lot of men who were even taller.  Bill and I are of Celtic descent and we're shorties.  I'm about 5'2" and he's 5'7".  We felt like we weren't done growing.

I also noticed that Hamburg is heavy on designer stores.  I'm sure there are plenty of wealthy people there.  In fact, on the way to the airport, I noticed some very impressive "Victorian" looking homes on the outskirts of town.  But I have to wonder if there really are that many people wanting to spend so much money on clothes and other luxury goods.  I guess there must be, though I didn't see too many people actually shopping in the stores.  I did see a lot of bored looking security guys standing around in the stores.

I mentioned to Bill that though Hamburg has more bridges than Amsterdam does (and I haven't yet really seen Amsterdam, other than the airport), the city reminds me a lot of Oslo.  Fortunately, it's not as expensive as Norway's capital is, but it is just as cold!  Or at least it was when we were there.  We were told Hamburg doesn't get so much snow, though, because it's so close to the water.

After we walked around Hamburg some more, we decided to have lunch.  I noticed a cute little Portuguese place near The Funky Fish and Le Plat du Jour that I wanted to try.  Bill and I headed over there and, boy, did that turn out to be a great ending to our Hamburg adventure!  I think there must be a number of Italian and Portuguese folks in Hamburg because we saw a lot of restaurants featuring either cuisine.  Italian restaurants were especially plentiful.  Curiously enough, we didn't see many Greek restaurants at all.

Anyway, we headed over to this little Portuguese place called O' Cafe Central that is well liked by Yelpers and Trip Advisor.  We didn't check Yelp! or Trip Advisor before we went there.  I just had a good feeling about the place, which was offering a very economical three course lunch special for 10 euros.  We had plenty of time to enjoy a leisurely lunch and when we arrived, I think there was maybe one other party in the place.  By the time we left, it was pretty full.  Obviously, it's very popular with the local business crowd.  After our lunch yesterday, I can see why.

Service is very prompt and friendly, though I don't think either of the two ladies who helped us were English speakers.  To be honest, though, I found that kind of refreshing.  It forced me to use my fledgling German skills. 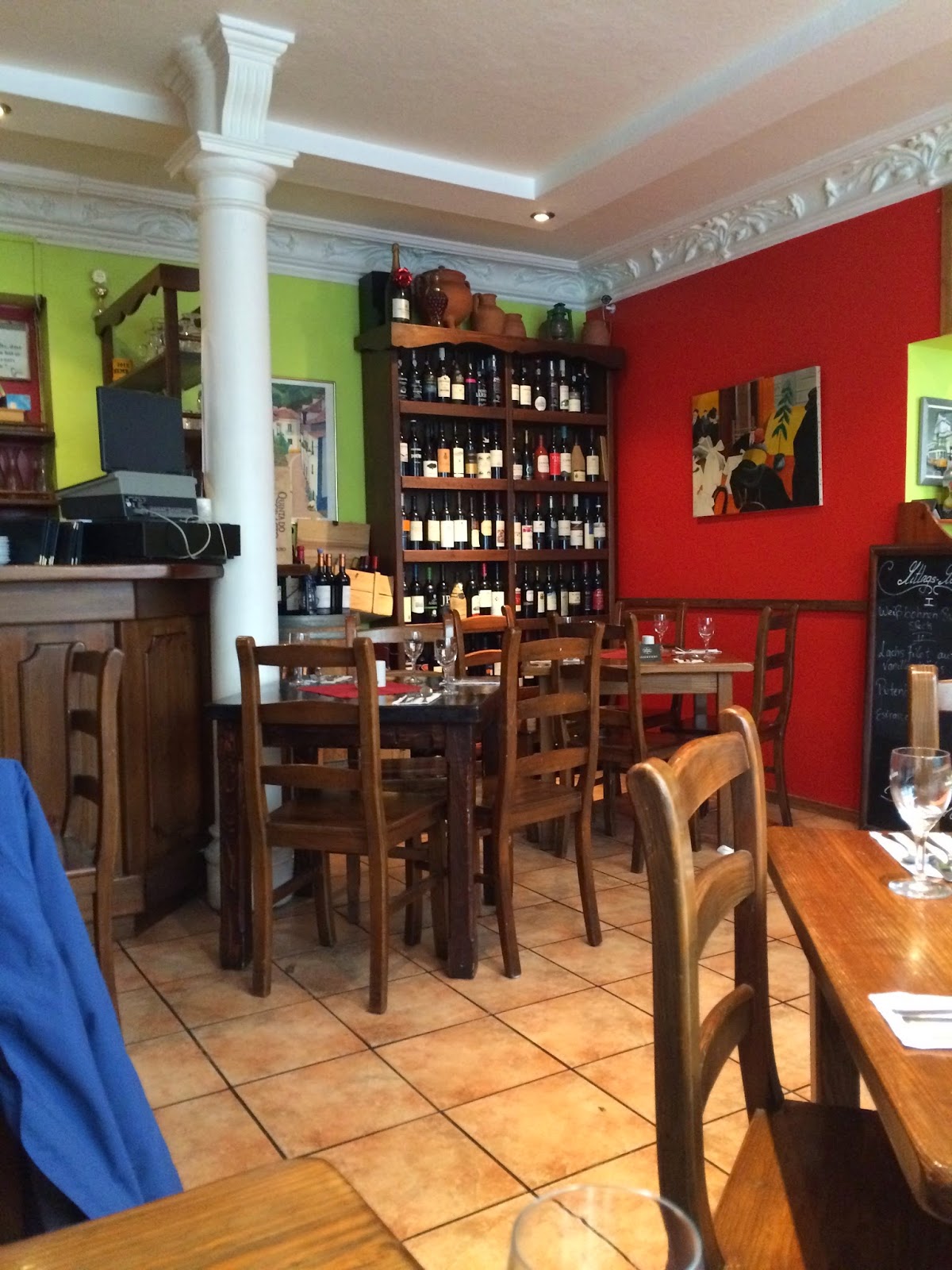 The view from our table before the place got busy. 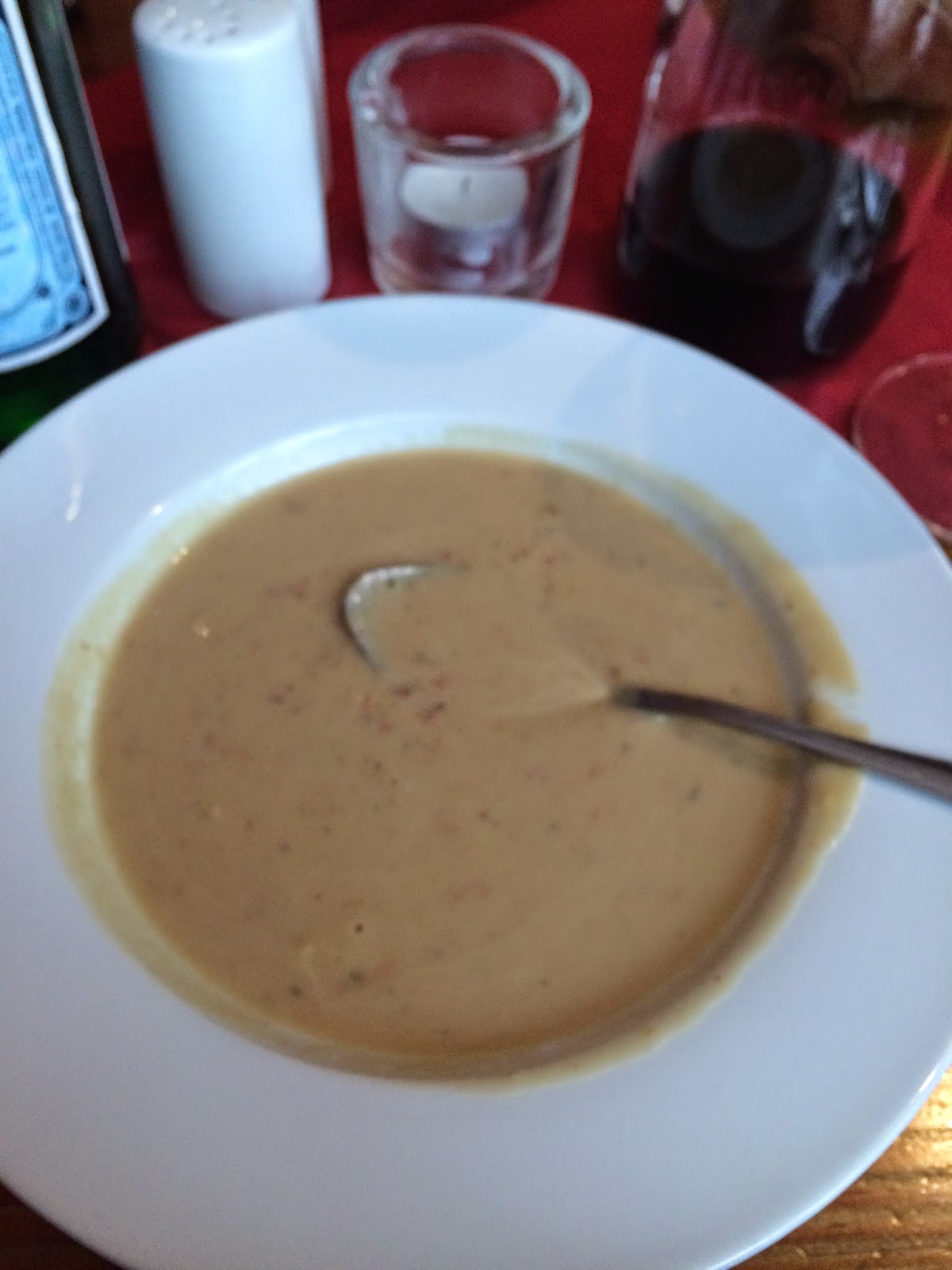 Yesterday's special included a white bean soup with bacon.  This soup was delicious and filling!  It reminded me a little of peanut soup, though I didn't see peanuts listed as a starring ingredient.  It was still a very nice soup for such a chilly afternoon. 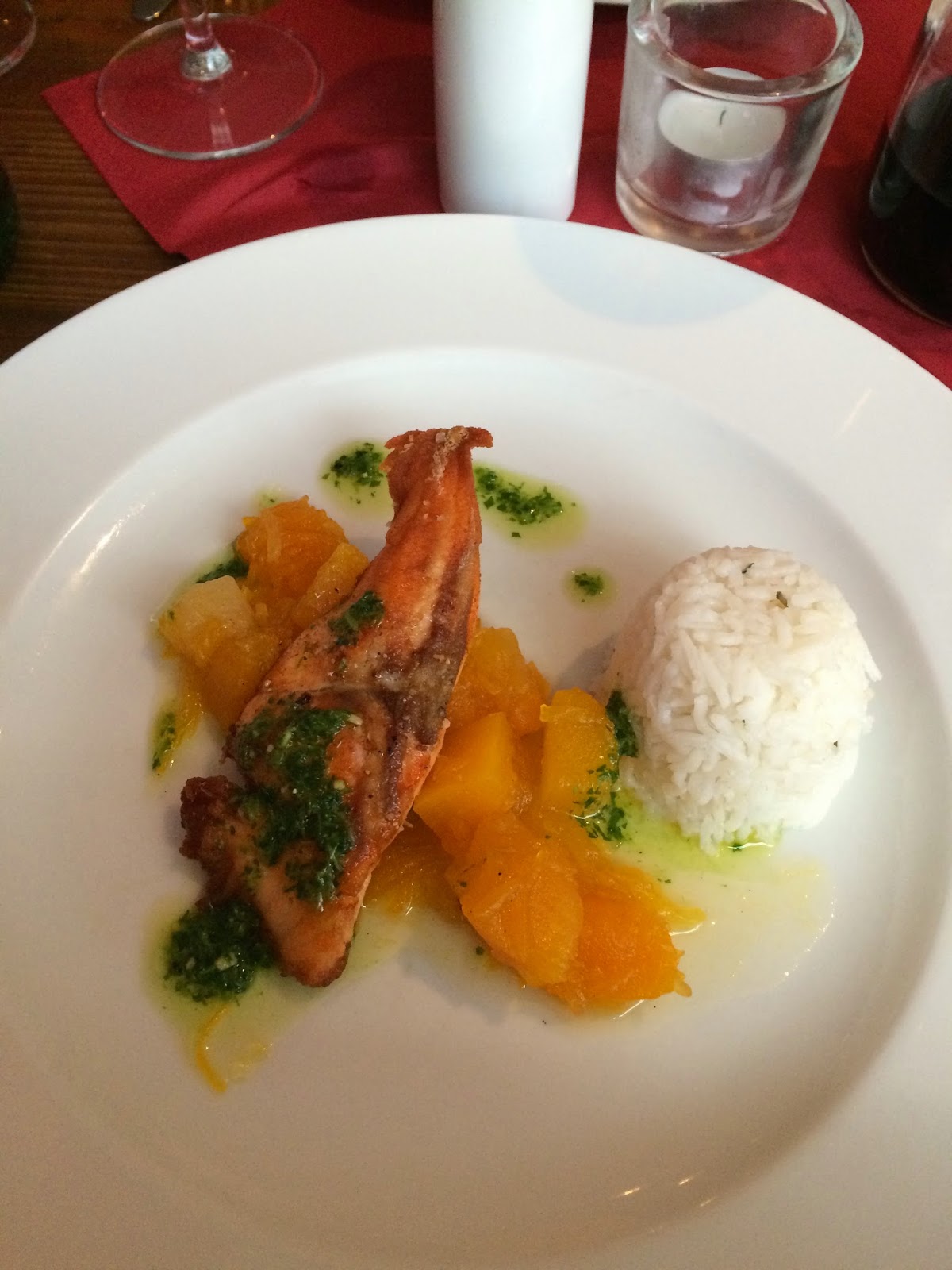 We had a choice between a salmon filet or turkey medallions.  I had the salmon, while Bill had the turkey.  We both really enjoyed our main courses.  My salmon came with some kind vanilla scented fruit.  I'm not sure what it was (ETA: it was pumpkin).  Bill thought it was squash at first, but it was too sweet for that.  It could have been apricots.  Honestly, all I know was that whatever it was, it was delicious! 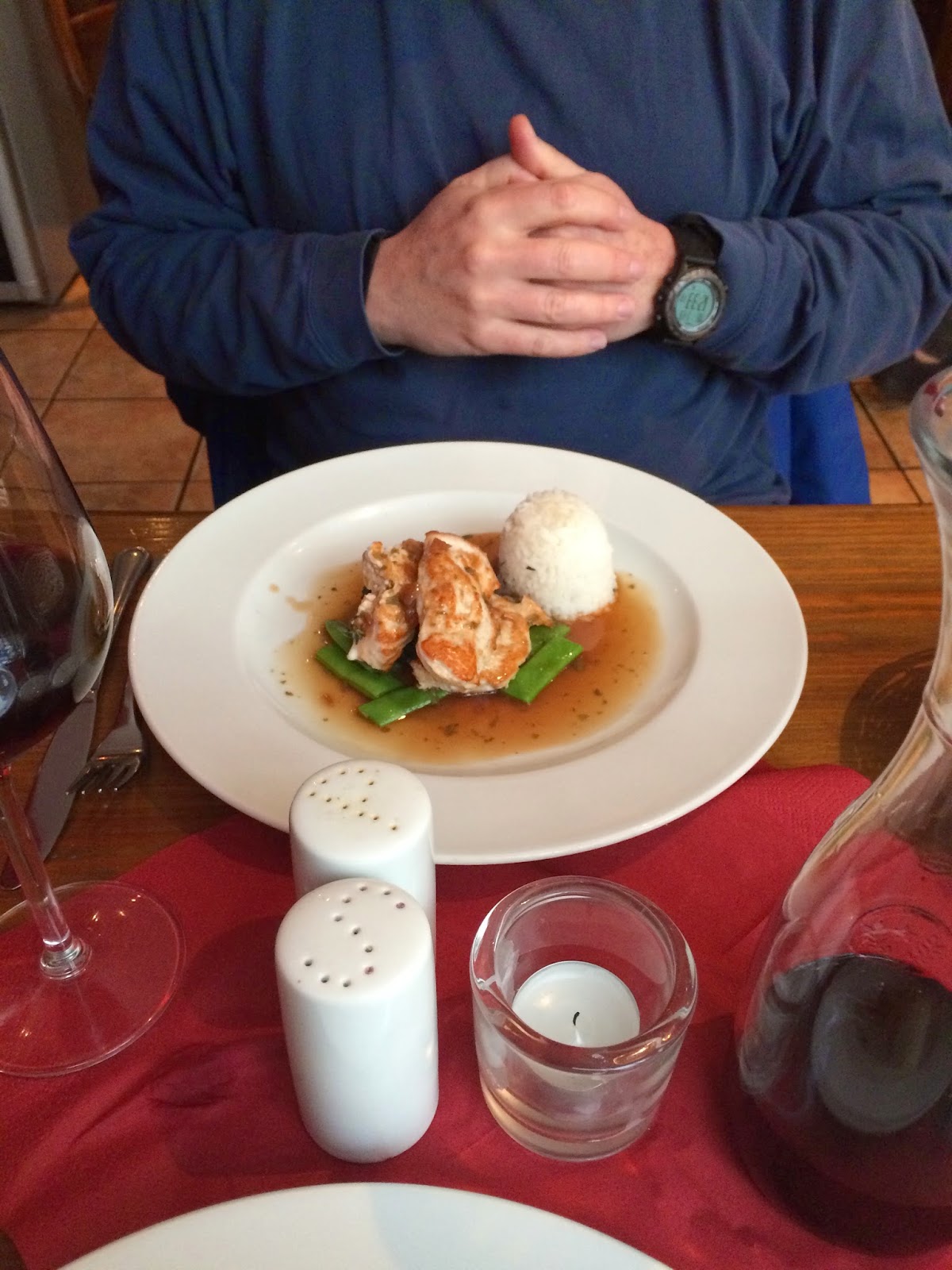 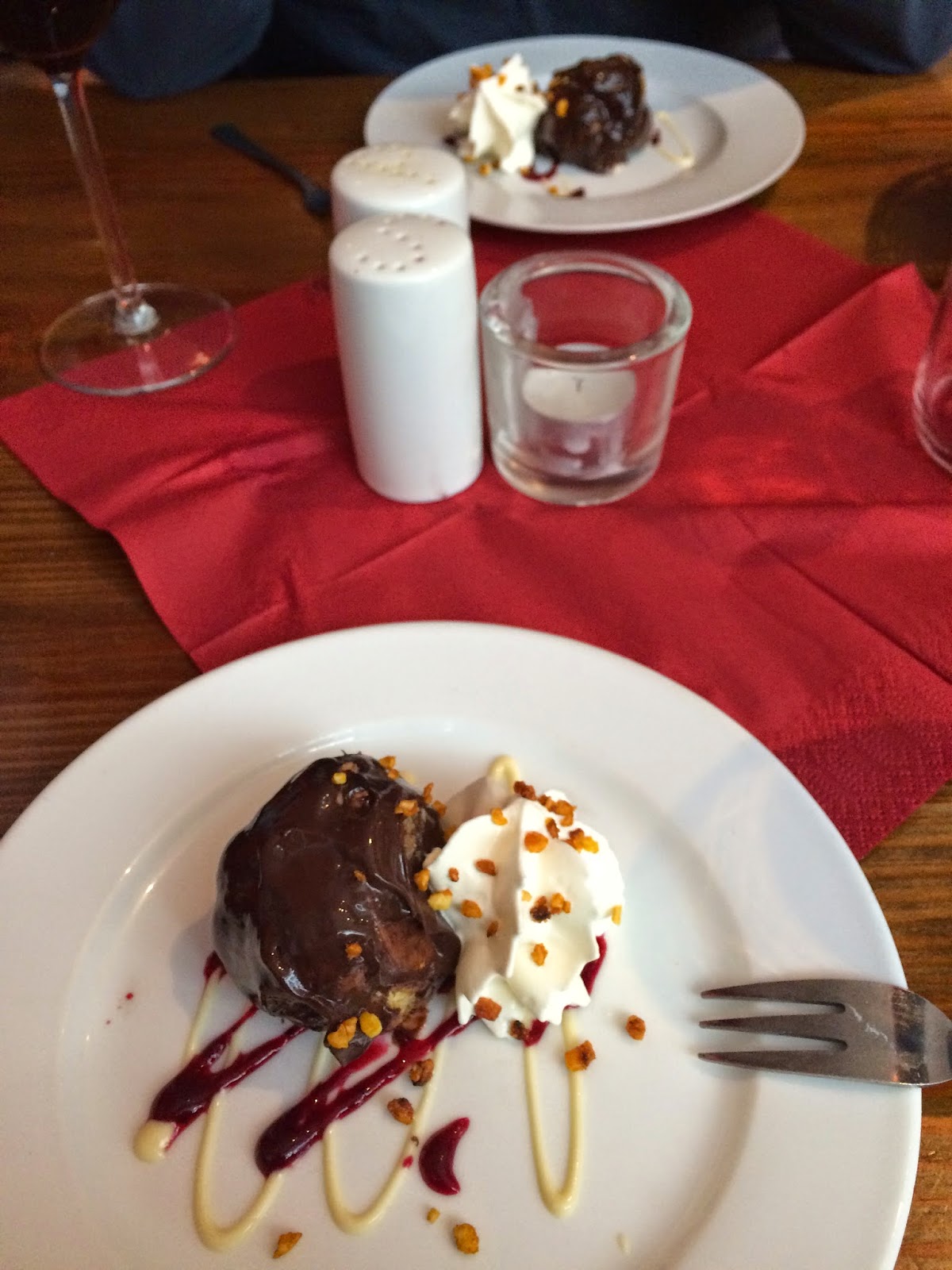 Our specials came with dessert.  My mouth is watering looking at it right now... They were like little eclairs with raspberry coulis and cream.  Very nice! 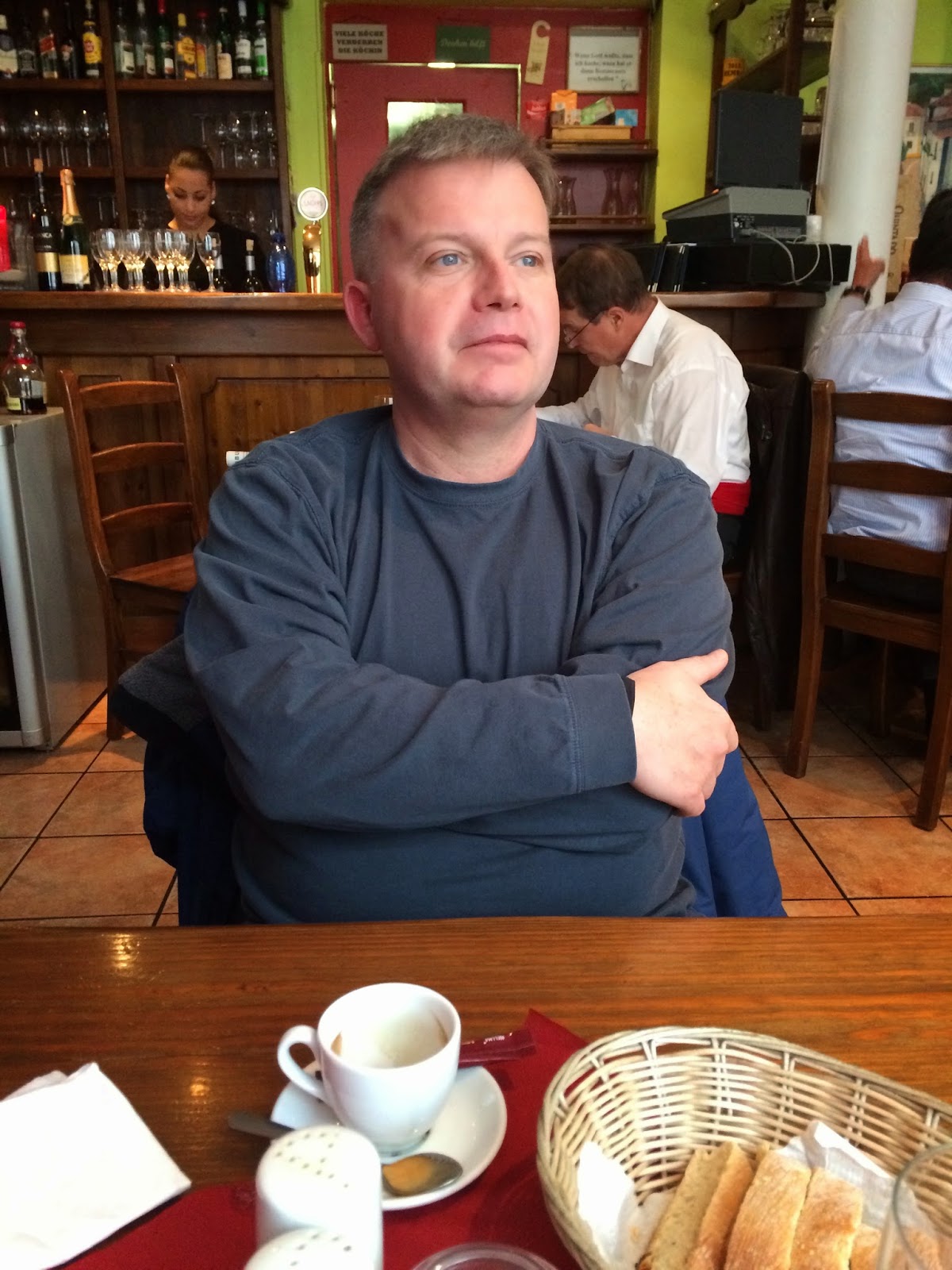 We finished up with espresso... all told, our check for our lunch, which included a half liter of house red wine and a bottle of San Pellegrino, was about 32 euros!  That made up for our overpriced breakfast! 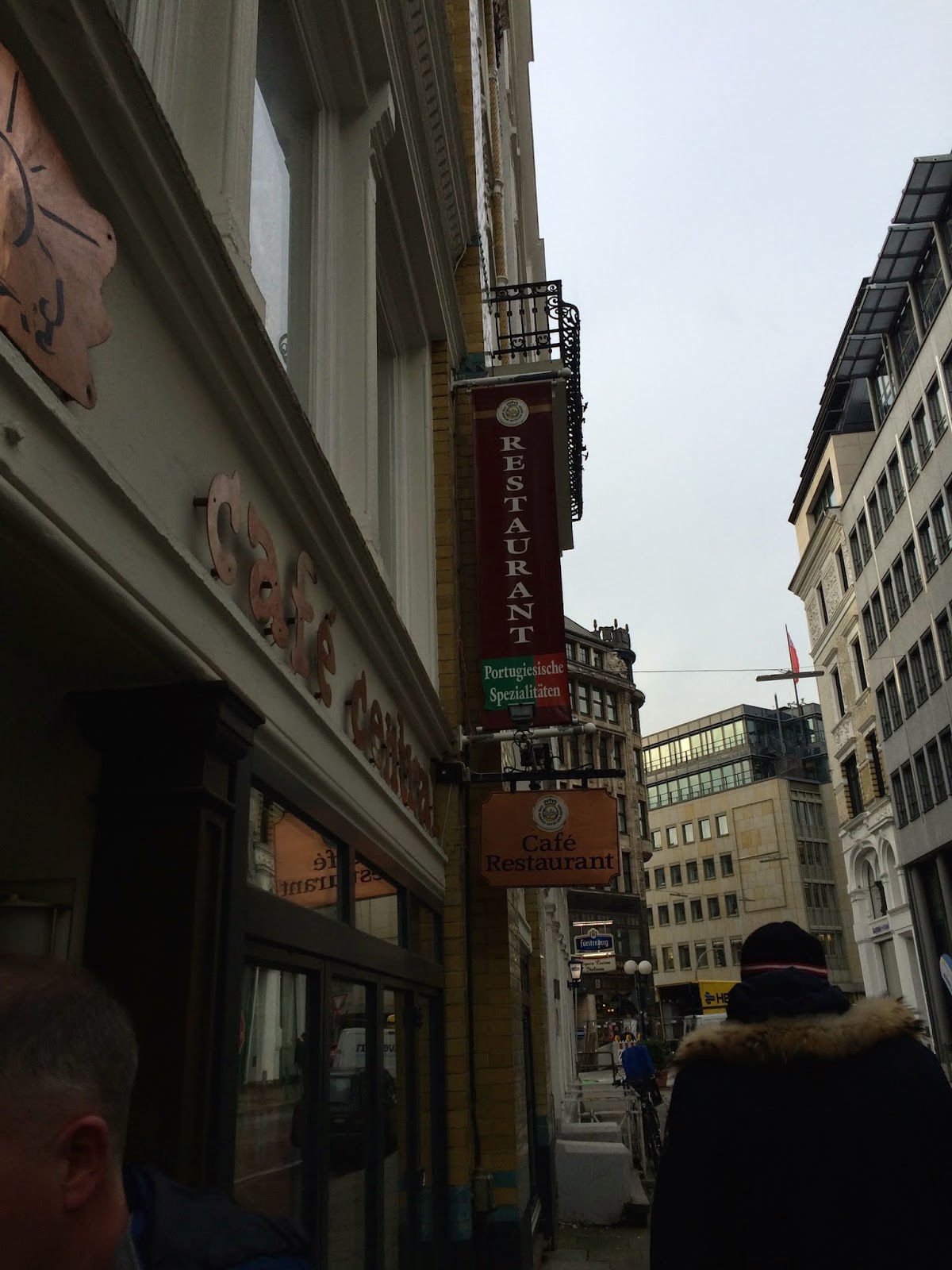 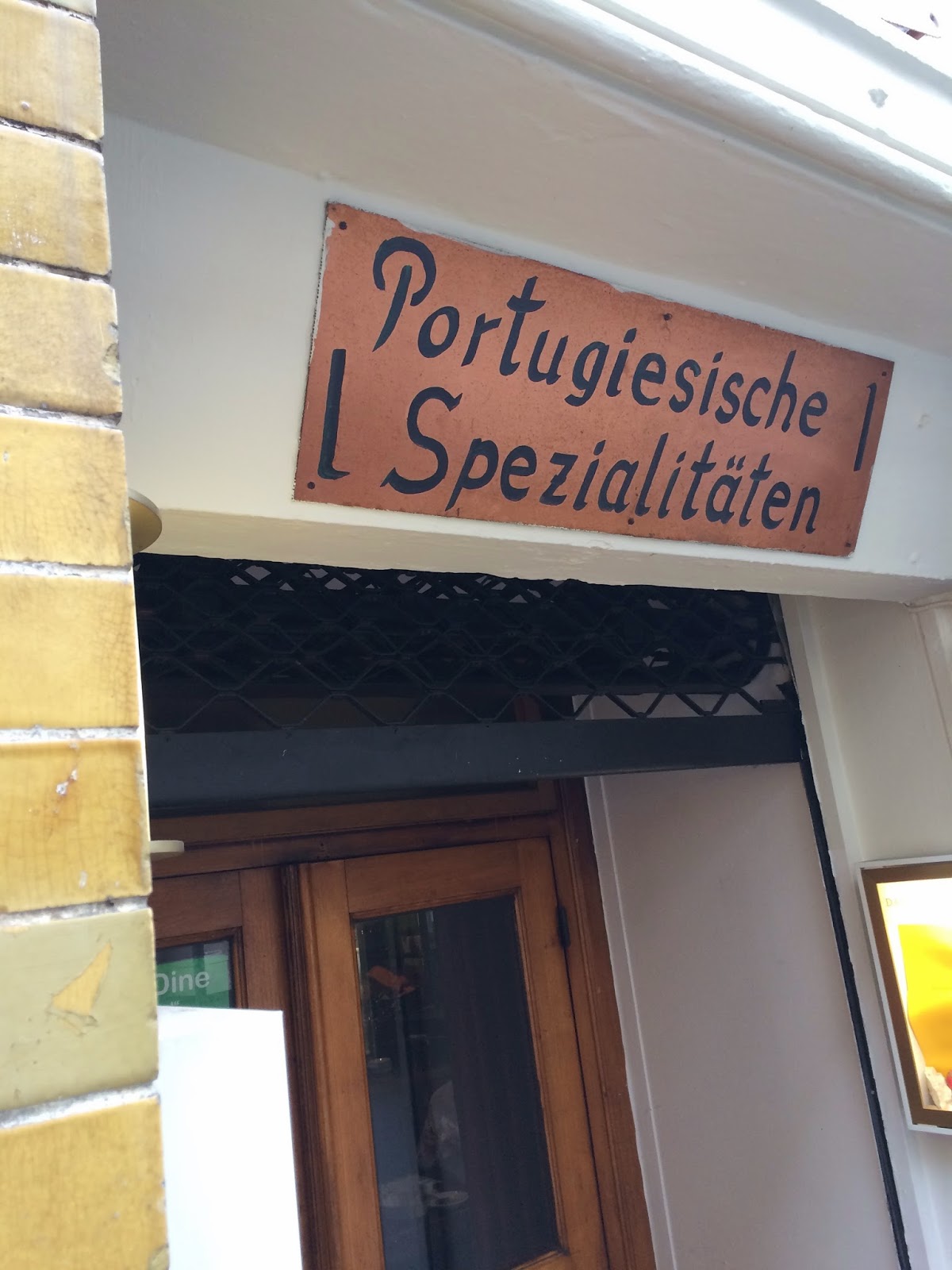 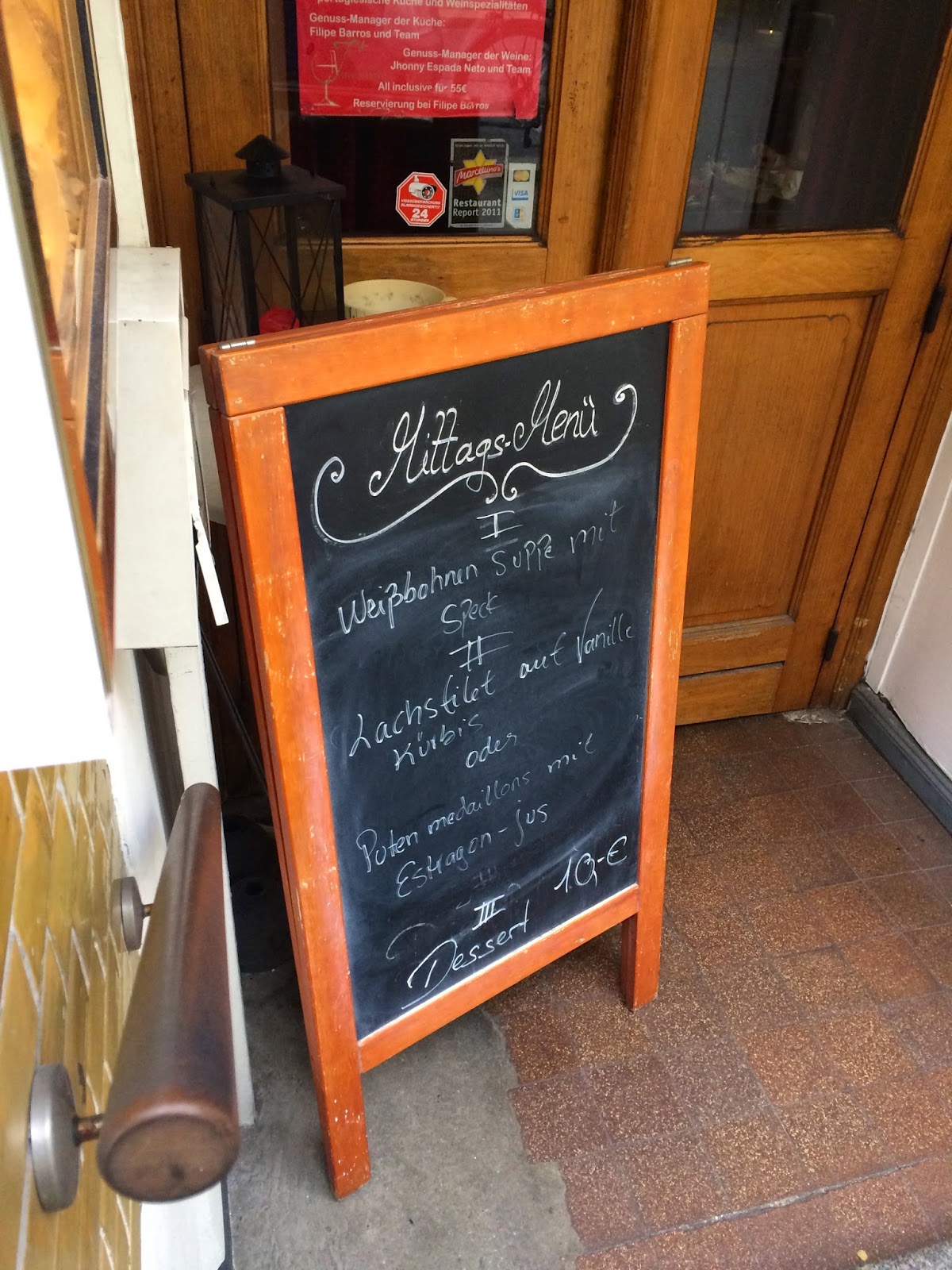 O' Cafe Central was bustling by the time we left.  That's another restaurant I would not hesitate to enjoy again in Hamburg.  Had we not liked the lunch special, we could have ordered off the menu.  We saw people doing that and what was being served looked excellent.  Service was fast, friendly, and very pleasant.  Yet another culinary jewel!  And if you like Portuguese beer, you're in luck... they have Sagres!