We sort of took it easy yesterday, since Mom's knee has been giving her trouble.  At about 3:00 yesterday afternoon, we headed for Wurmlingen, where there is a chapel on a hilltop that overlooks Pfäffingen, which is where we lived when we were in Germany the first time.  I was hoping we could drive to the top because it was hot outside and Mom wasn't up to hiking.  Unfortunately, you have to either bike or walk to the chapel.  There is a large parking lot at the bottom of the road that leads up to the church.

What we managed to see before Bill turned around was promising.  Bill and I will have to go back and do the hike to the church when the weather is less fierce.  The upside to our exploration was that I discovered an open WC that was free to use and relatively clean.  Too bad the guy in the camper ahead of us didn't notice it.  He pulled off to pee in a port-a-potty and ended up backing up traffic. 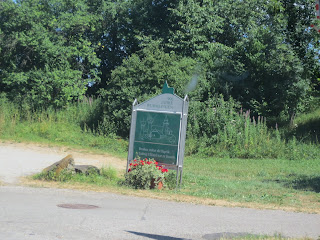 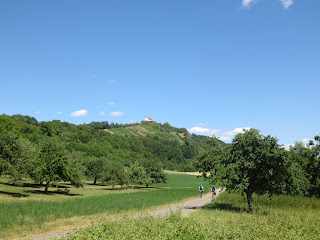 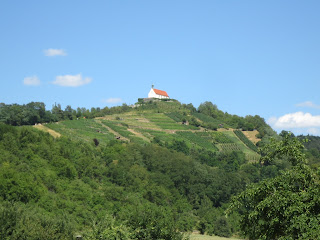 Nice to have a shot of Wurmlinger Chapel from another direction...  We'll get up there soon. 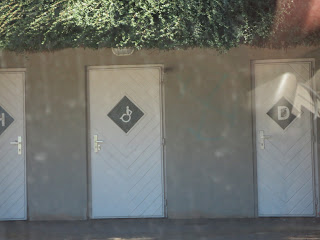 I was surprised to find these toilets unlocked.

After our failed trip to Wurmlingen, we went to Nagold and visited the city museum.  Bill and I had seen it a couple of weeks ago when we visited Nagold last time, but we thought my mom would find it interesting, since it focuses on Nagold during Hitler's era.  I was able to translate a little for her, but she mostly winged it a bit.  I think she still enjoyed her visit, if only because the Steinhaus it's housed in was a bit cooler than outside.

Next, we stopped by Longwy in Nagold, which is a bar right next to the river.  Bill and mom had some iced tea, while I had my requisite beer.  While we were enjoying our drinks, it occurred to me that the dogs were going to be hungry if we didn't feed them before we enjoyed dinner at Osteria da Gino's in Nagold.  So we finished up, went home, fed the dogs, let them pee, and then came back to Nagold for our seven o'clock reservation at Gino's. 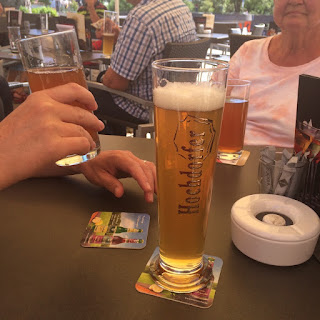 We originally wanted to eat there on Monday, but they were completely booked.  I was a little concerned that Gino's style of abundant Italian hospitality might be a little too much for my mom, but she ended up really enjoying herself and the food.  As usual, it was delicious, and Gino and his wife were as delightful as always.  In fact, when Gino got a load of my mom, he could immediately tell who she was.  He smiled and said, "Your mama!" in Italian.  Of her four kids, it's true that I look the most like her. 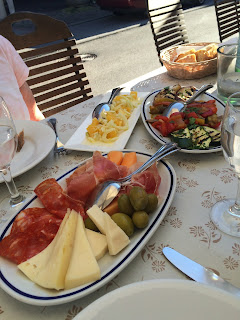 Vorspeisen with the usual cheese, bread, olives, sausages, and grilled veggies, as well as the orange and fennel salad.  Mom had some red wine, while Bill and I had prosecco and San Pellegrino. 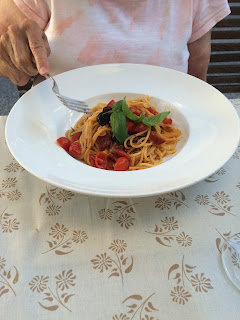 A little spaghetti with cherry tomatoes and black olives...  As we sat out on the sidewalk enjoying dinner, we watched many young folks passing in Fahrschule cars.  We even saw a student motorcyclist.  I guess Nagold is a good place for driving lessons. 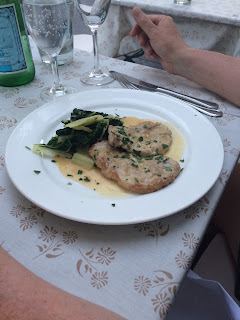 Bill had veal in a lemon sauce with sautéed spinach. 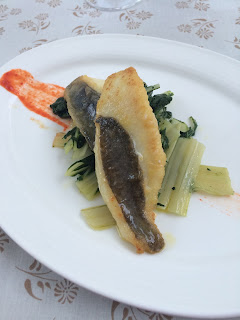 My mom and I each had the fish, which was a positively orgasmic John Dory filet. 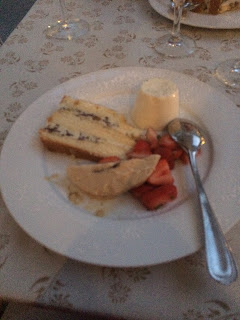 And dessert was strawberries, a little coffee ice cream, panna cotta, and a sliver of cake with anise.  We skipped our coffee and grappa.  The bill was 187 euros for the three of us.  I'm happy to report that no one chastised us at Gino's place.

I'm sorry I didn't get to try a new restaurant with Mom during her visit, but the weekend awaits.  Maybe after we hike up the hill to Wurmlinger Chapel, we'll venture into a new place to eat.  I don't think it's a very strenuous walk, but I like any excuse to try new restaurants.

Mom left this morning.  Somehow, her flight plan includes stops in Munich, Reykjavik, and Dulles before she gets to her final destination at RDU.  I say better her than me.  Apparently, the many stops were much cheaper than taking a direct flight from Stuttgart.  Since Mom has never been to Iceland, she decided she didn't mind dropping into the airport, just so she can say she's been.  My sister lives in Chapel Hill and will pick her up tonight at about 11:30pm local time for a short visit before Mom finally goes home to Hampton, Virginia.

It was good to see my mom.  I don't know when our next visit will be because neither of us plans another trip across the pond anytime soon.  But I do have a feeling that after Mom talks to my sisters, there could be more houseguests.  God help us all.  ;-)