We're going back to Scotland... why we're doing another Hebridean cruise 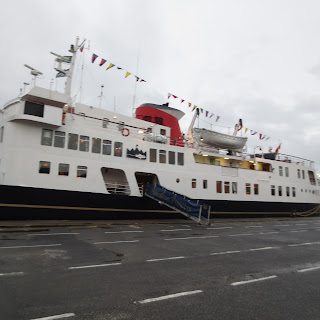 I already announced this on my main blog, which tends to get more readers than this one does.  It's mainly because I am a bit rawer on my main blog than I am here, where I try to be somewhat genteel.   Today's post will be somewhat less genteel.  I'm writing it because I want to convey why I think Hebridean may be the best cruise line ever.  If you can afford it, that is.

Bill and I took our first cruise(s) on Hebridean Princess back in November 2012.  It was in honor of our 10th wedding anniversary.  Originally, I had planned to take one five night cruise, but then it occurred to me that we could take a second five night cruise with little overlap of ports.  They were the last two cruises of Hebridean's 2012 season and they were relatively inexpensive.  Each five night segment was priced at $1960 for the lowest priced cabins.  If we booked another cruise, we'd get a 5% discount.  I told Bill that if we left after the first cruise, we'd be traveling during the busy Thanksgiving rush.  Moreover, I wasn't sure when we'd ever be back to Scotland.  That was before we ever knew we'd be back in Germany.

Fortunately, Bill agreed.  We made the booking and went off to Scotland in mid November 2012, not knowing that our sweet dog, MacGregor, was suffering from cancer.  Unbeknownst to us, he had a malignant tumor in his spinal column.  We had him on prednisone because he'd been having some problems with walking.  Our vet thought it was arthritis and/or disc disease.  She had instructed us to wean him off the drug, but that coincided with our trip.  We asked the people at the boarding facility to do it for us.

We had a wonderful trip to Scotland.  We went to Glasgow first, spent two nights there, then got on the very small vessel, which was originally a car ferry.  Hebridean Princess only handles 49 people at a time and is special enough that Queen Elizabeth II has chartered it twice.  Prior to cruising on Hebridean Princess, we had been on SeaDream I twice.  I thought that was an amazing experience.  I had no idea.  After ten nights on Hebridean, my mind was changed.  I still love SeaDream, but it is no longer #1 to me.

Anyway, our Scottish cruise was insanely awesome.  Once we boarded the ship, we were completely taken care of.  They didn't even ask us for a credit card.  The service was just impeccable.

While we were cruising, MacGregor was having some problems.  The people at the North Carolina boarding facility where he was staying took very good care of him, but he really had trouble when he went off the prednisone.  One day, he just up and collapsed.  The folks at the kennel had to take him to our vet.  They were in constant communication with us, which was frustrating because there was nothing we could do from thousands of miles away other than worry.  At one point, the kennel manager sent us a letter from our vet advising that we put MacGregor out of his misery before we came home.  Naturally, that was devastating news to us, especially since we thought he had arthritis.

On the last night of our wonderful cruise, there was a gala event.  Bill and I were dressed to the nines, but I was very upset about the dog.  Bill had called the vet in North Carolina, who told us that MacGregor wasn't on the edge of dying or anything, but he was in pain.  We told him to keep MacGregor comfortable as best he could.  We would get back after a few nights in Edinburgh and have him checked out.  We eventually took him to NC State, where an MRI was done.  That was when we found out he had cancer-- up until that point, we had several vets arguing about what was wrong with MacGregor and we didn't know who to believe.

The Hebridean staff was wonderful as we were dealing with all of this stuff.  But what was really awesome was what happened later on the last night on the ship.  It was the last night of their season.  After throwing up when I heard about MacGregor and before the haggis, I suddenly realized that Aunt Flow had come to visit me.  Somehow, I had come onboard completely unprepared.  I had remembered everything else we needed on our trip.  But I had forgotten to pack maxi pads.

I was very upset about everything that was going on: my dog ailing in North Carolina, vomiting, and now, an unexpected visit from Aunt Flow.  So Bill, being the wonderful guy he was, grabbed the assistant purser, a lovely Latvian lady named Valeria.  He said, "I need your help."  She looked at him expectantly as he said, "Jenny just started."

That was all he needed to say.

Valeria said, "I can't promise I'll get the best selection, but I'll knock on your door..."

Ten minutes later, Valeria discreetly presented Bill with a bag of feminine hygiene products she'd collected from other staff members.  While I am sure this problem has come up before, I doubt it happens often.  On our first cruise, I was the youngest one onboard at age 40.  The second one included a couple of younger women, but for the most part, people on Princess tend to be silver haired and well past their childbearing years.  Valeria handled the situation like a champ.

I had enough supplies to get me through the night.  The next morning, the purser gave me a hug and wished us well.  I was later able to get the products I needed (and I have never made that mistake again).  We got back to North Carolina a few days later and took care of MacGregor until we sent him to the Rainbow Bridge on December 18, 2012, after we learned of what was really ailing him.

A month later, we adopted Arran.  We named him after one of the beautiful islands we visited in Scotland.  He remains a wonderful companion, though I just found out last week that he had a cancerous mast cell tumor (which was hopefully entirely removed).  I only hope when we get on Princess in March, he'll still be just fine.

Scotland video...  which is a little less emotional.

Anyway, with service like that, I knew we had to sail Hebridean Princess again, especially after mom raved about it last week.  I can hardly wait.  And I am hoping that this time, we have no sick dogs or menstrual catastrophes.
Posted by knotty at 9:16 PM