Beer and Fucking Tour... beer spa #1 at the Moorhof

So, finally it was time to try out the Moorhof's beer spa.  Bill and I slipped into our bathing suits and I wrapped up in the robe I wisely brought with me (I don't think they had them at the Moorhof).  The hotel has sauna towels, but we brought our own spa towels, which are huge and cover everything.  The nice lady who checked us in told us to wait by the door where the beer spa is (and you can tell which one it is because it says it's only for beer spa patrons).  We waited patiently for her to come and get us started. 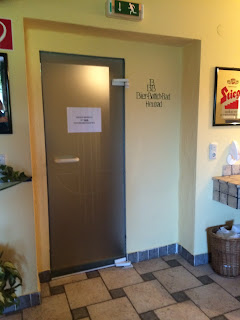 For beer spa patrons only!

Finally, we went into the little room where the fake beer keg looking bath is.  She had already prepared it with hot water and hops.  I got in first and sat on the side close to the wall, where there was a beer keg with spigots over the tub.  Unfortunately, they were just decorative.  Bill sat on the other side.  There were two dark beers waiting for us, included in the treatment.  She turned on the tub and told us she'd be back in 20 minutes.

Bill and I visited the beer baths in Chodovar, which is a beer spa in the Czech Republic.  That was a great experience and we really enjoyed ourselves.  I think we liked the Moorhof's beer spa a little better.  For one thing, it was more private.  At Chodovar, there are a bunch of tubs in one room and people bathe at the same time, albeit it with sheets drawn for privacy.  The Moorhof had the one beer bath in the room we were in and I think there was another room with two or three more tubs for those in groups.  I liked that the tub was like a jacuzzi, too.  And the hops and stuff added to the water was definitely rough.  Some of it stuck to me when I got out of the bath.

The beer bath at Moorhof is hot and you definitely wouldn't want to drink the beer used for the spa treatment.  It's really more like a wort than actual beer.  But it's relaxing and a lot of fun.

After thirty minutes, the lady came back, had us strip naked (and she averted her eyes so she didn't see us in the buff), then wrapped us in sheets.  She escorted us to a wooden bed covered in oat straw that had a sheet over the straw.  We laid on the straw and she covered us with a blanket and turned out the light.  We laid there for thirty minutes.  Actually, I had to get up a little sooner than that because I had to answer the call of nature.  But again, it was very nice... very restful and relaxing and not itchy at all.  I was expecting the straw bed to make me sneeze or scratch, but it didn't.  It was surprisingly comfortable and pleasant. 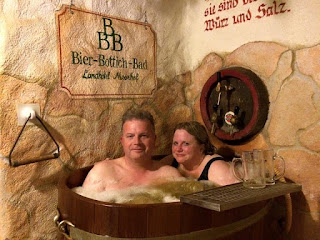 I don't usually pose for pictures, but I made an exception... 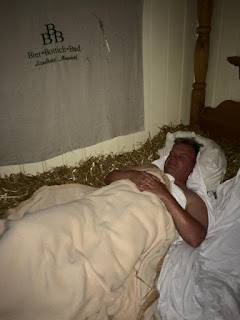 After we were finished with our treatments, we showered.  We really needed to shower because there was beer spa residue all over us and in our bathing suits.  Then we got changed and went to dinner, where we enjoyed four courses.  Each course included beer in the ingredients.  Three small beers were included with the dinner. 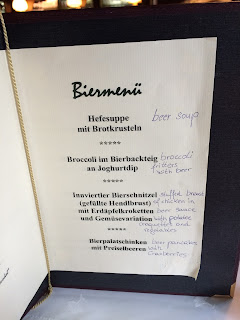 They thoughtfully translated for us. 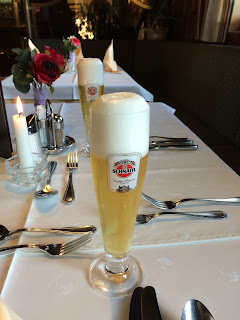 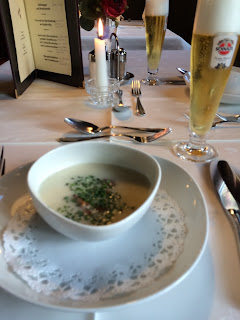 Beer soup.  It was very yummy, even if the color was a little iffy. 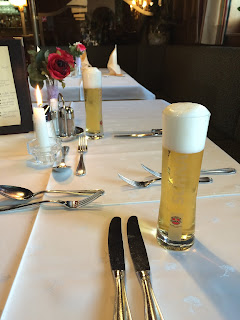 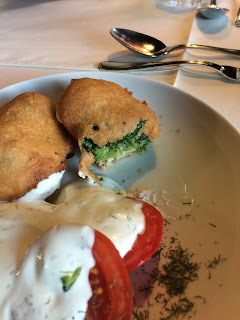 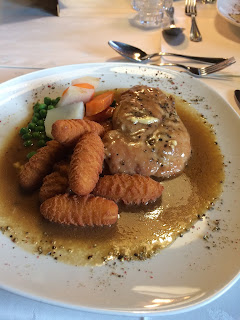 I didn't eat much of the chicken and potato croquettes because I was getting full and wanted dessert.  It was good, though. 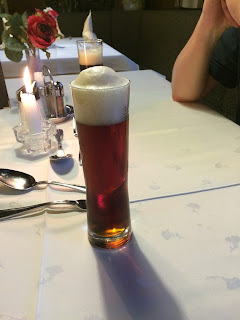 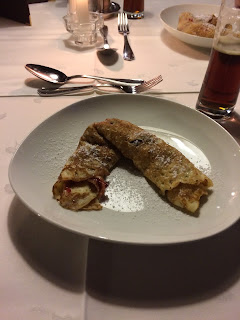 Remember in the first post of this series, I mentioned tour buses?  Well, there was one parked at the Moorhof on Saturday night.  I think it was full of young folks in a band of some sort.  We heard a few brass instruments playing scales.  This was the only tour group we encountered that consisted of students.  It was interesting to watch them, especially when the adults had to come in and herd some of the stragglers from the breakfast buffet the next morning.

The beer spa at the Moorhof was great!  But it paled in comparison to the Starkenberger Beer Pool.  Stay tuned for that post coming up soon.