Dining with new friends at Osteria da Gino's in Nagold

We wanted to have a really great meal this weekend.  Since the weather was nasty and the Schoenbuch Tunnel was closed, we decided to stay close and not try to use 81.  Osteria da Gino is in Nagold, which is about five kilometers from our little town.  Since our first time in March of this year, it's become one of our favorite restaurants in the area.  We were long overdue for a visit, since our last one was in July while my mom was visiting.

Bill sent an email on Friday requesting a reservation on Friday or Saturday night.  Friday night was totally booked, so we were set for last night at 7:00.  I was really looking forward to it.  Then yesterday morning, I got a message on Facebook from my new friend Sarah, who asked if I could remind her of the name of "that awesome Italian place I wrote about."  I told her about Gino's place and that if she went last night, she'd see us there... and probably even at the same table!  Sure enough, that's what happened!

It was great to see Gino, who was in the front part of his restaurant/store when we arrived.  We were immediately and enthusiastically greeted.  In fact, he even gave me a big hug and asked us in German why it had been so long since our last visit.  He asked about my mom, too.  Given that she was here over four months ago, I thought that was very impressive!  He led us to his tiny dining room, the few tables of which were almost all decorated with "reserviert" signs.

Sarah and her husband, Mike, were already seated and working on their first courses.  Although this was our first meeting in person, I had exchanged Facebook messages with Sarah a few times.  Mike and Sarah live in Sulz am Neckar, which is not that far from Nagold.  Gino could tell we were going to be fast friends, so he invited us to sit at their table.  As much fun as it is to dine with Gino as a couple, it's even more fun when you're with friends and can share the unique experience as well as the fantastic flavors!

I have mentioned before that Gino doesn't really offer menus to his guests.  He also speaks very little English.  Although I don't speak much German or Italian, I have always managed to communicate with Gino, who by now knows full well about my hatred of mushrooms.  With a bottle of San Pellegrino and a couple of glasses of red wine on the table, we were ready to have dinner. 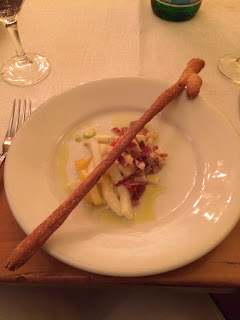 We started with the usual orange, salami, and fennel salad.  This time, it came with a little cheese.   It tasted like Parmesan, but I'm not absolutely sure that's what it was.  There was also a fresh breadstick. 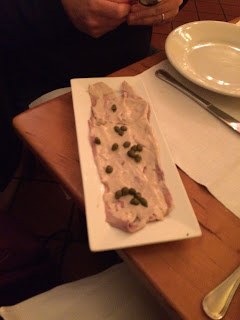 Next came a trio of antipasti.  Pictured above is tuna carpaccio with what tasted like a mustard cream and topped with capers.  Although I was a little leery at first, I have to admit that this was absolutely delicious.  It was one of my favorite of the dishes offered last night. 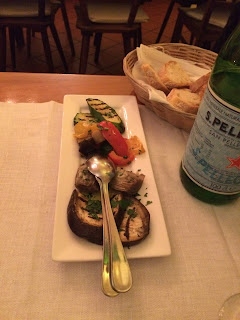 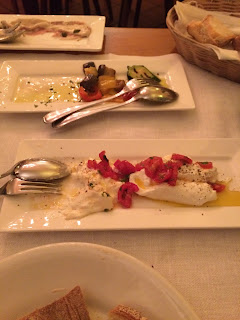 And everybody loved the Burrata, which was a sinfully smooth creamy cheese that reminded me a bit of mozzarella, only it was smoother, milder, and much creamier.  I don't usually go for cheeses, but I have to admit I really enjoyed the Burrata with its garnish of sweet tomatoes and basil.  Wikipedia tells us that this cheese is made with cow's milk mozzarella and cream... the word Burrata means butter in Italian. 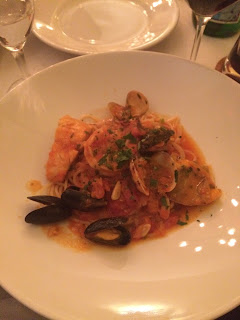 The pasta course for us consisted of spaghetti with crushed tomatoes, fish, shrimp, and mussels...  Sarah and Mike had what looked like homemade stuffed shells with cheese.  Sarah said there was a spice that tasted a little like nutmeg.  I'm pretty sure I had the same pasta course they had on our first visit.  I enjoyed watching her facial expressions as she tasted it!  Likewise, Bill and I enjoyed our pasta course, though maybe it was a little bigger than we needed.  I didn't eat much of the actual pasta because I knew the main course was coming!  But I eagerly tucked in to the fruits of the sea, which were expertly prepared and delicious. 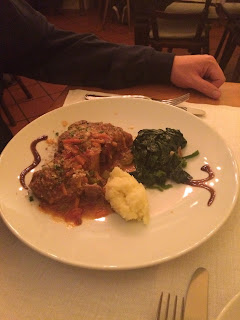 Bill had osso bucco (veal) for his main dish.  So did Sarah.  Once again, I watched their facial expressions and they could only be described as orgasmic.  I like the taste of veal, but seldom eat it.  I did try a little of Bill's dish, though, and could see why it was such a hit.  The meat was like butter and could have been cut with a spoon...  It was served with spinach and potatoes. 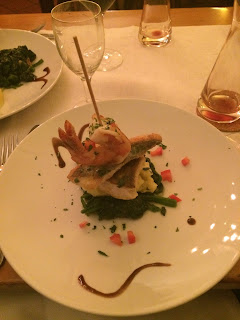 Mike and I both went for the fish option.  Stacked on a bed of spinach and potatoes was what I think may have been John Dory filet and a large grilled shrimp.  It, too, was a winning dish! 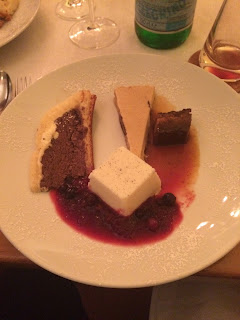 Sarah and Mike were too full for dessert.  Bill and I decided to go all the way and this was what the chef brought us...  a medley of panna cotta with currant sauce, a sliver of coffee flavored ice cream, a small piece of cake, and what tasted like a tiramisu inspired sweet.  We also had a round of espresso.

By the time we were finished eating, it was about 9:30.  The dining room had filled up.  One table included English speakers who sounded like they may have been Europeans speaking a common language.  They were having a fabulous time, too!  And Gino and his staff were joining in the merriment.

Sarah and Mike spent 119 euros on their dinner, while ours was 160 euros (we had dessert and the pasta with fish and shrimp).  On the way out, Gino's wife and the chef invited us to enjoy some grappa and Gino's wife asked me about my mom!  She does speak a little English, as does the chef, who was wearing a shirt that read "Make food, not war."

On the way home, Bill and I were talking about how amazing our night was, not just because of the food and Gino's warm hospitality, but because we left his place having made two new friends.  It goes without saying that I highly recommend Osteria da Gino in Nagold.  Just make sure you make reservations, can spend a few hours, and aren't looking for pizza.  Also, go with an open mind and a willingness to try something new and exciting!  As we found out last night, it's also a great place for friends.  Sarah and Mike were raving about the experience as we said goodnight!